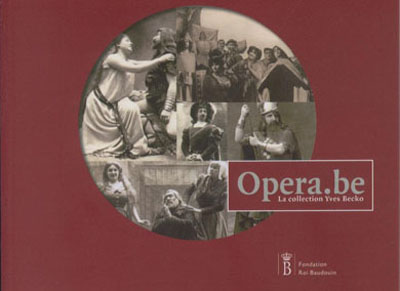 
The history of Belgian singing has been served well over the last 6 years. In 1999 we had the publication of Belgian Opera Houses And Singers by Richard Soper (The Reprint Company) and since then Musique En Walloniehas issued several CD with legendary Belgian singers.
Now thanks to the Koning Boudewijn Foundation we have the welcome release of a 2 CD set filled with recordings from the collection of the late Yves Becko.

Yves Becko (1943-2004) was a prominent collector of recordings relating to the Belgian operatic heritage. He also had a keen interest in singers from elsewhere as this release proves.

Becko, a controversial figure among the collecting fraternity, visited me in my Brussels home a few years before his death.
He struck me as a fine gentleman who was able to converse in Dutch with me -a rare feat amongst people from Wallonia-.
He phoned me a while before his death to arrange another meeting to exchange records and ideas. Sadly this meeting never materialised as he had developed cancer which proved fatal.
His wife had the good idea to contact the Koning Boudewijn Foundation who purchased the entire collection and thus preserved it in its entirety. The collection is now housed in the Royal Library in Brussels.

An exhibition was held and this CD edition was released simultaneously. The two CDs are accompanied by a 95 page booklet with loads of illustrations of singers and record labels.

The selection includes a wonderful selection of singers. Most have been never released before in any format except 78 rpm or acetate.
Another interesting aspect of this issue is the choice of repertoire, which often is out of the ordinary. Thus we get Henri Albers in Lerouxs Le Chemineau, baritone Jean Delvoye in an aria from Gevaerts Quentin Durwaard, Alexis Ghasne sings an aria from Grisars Le Carilloneur de Bruges and Monnaie stalwart mezzo Livinne Mertens sings an excerpt from De Boecks La Route démeraude.
Other repertoire rarities include an Edison cylinder featuring an aria from Blockxs Princesse dAuberge by baritone Maurice Decléry and Laurent Swolfs sings an aria from De Bruid der zee by the same composer.

Singers include a vast array of mostly Belgian artists who were local celebrities and rightly so.
If you dont know dramatic soprano Claudine Boons get this CD and play her rendition of Ritorna vincitor (in French) and contralto Jeanne Monforts Viens, avec nous petit from Godards Vivandière.

This is singing of the highest order! Most collectors familiar with 78 rpm artists will know Armand Crabbés Caravane recording from Rabauds Marouf but this Italian version is hard to come by and so is Yvonne Ysayes (niece of the renowned violinist) recording of Butterflys aria.

Baritones include Dinh Gilly, Charles Gilibert, Jean Lasalle, Gabriel Soulacroix and Jean Noté.
At 15 Euros (postage not included) this release is a real bargain, pressings were limited so if theres enough interest youd better hurry and order your copy before its completely sold-out.

Heres the website where you can order your copy of the Yves Becko record collection. Happy listening!

Richard Sopers Belgian opera houses and Singers can still be ordered at: www.norpete.com