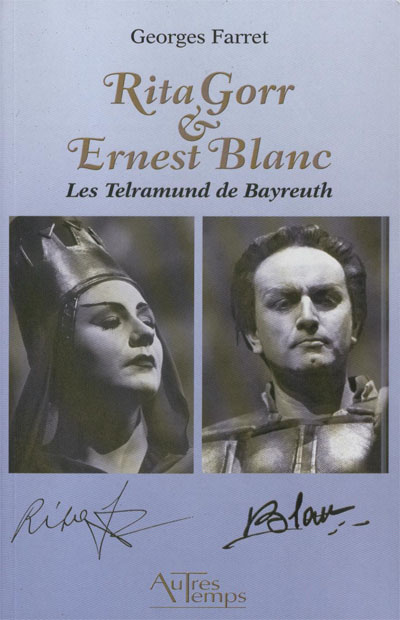 
This season Rita Gorr* will retire at age 80 at the Flemish opera the same house where she made her debut 57 years ago while regrettably Ernest Blanc's health at age 83 has deteriorated to the almost impossible.

Georges Farret, author of this book is a dedicated fan of them both which clearly shows in the writing of the book with not a critical eye to be found.
But even a fan's book can have its merits. He clearly got help from the singers themselves as some remarkable photographs are included and he even managed to put together a fairly decent chronology of both artists. Included too are discographies which are well-done if you stick to the commercial releases alone.

Ernest Blanc surely was one of France 's greatest operatic baritones of the post WWII period. His career unlike some of his French contemporaries -Bacquier and Massard excepted- was not confined to his home country alone but quite international.
He sang in Argentina , Brazil , Berlin , Dortmund , Amsterdam , Brussels , Salzburg , Tel Aviv, Alger La Scala, Naples , Florence , Lisbon , Barcelona , Russia , London , Edinburgh , Glyndebourne but also in the States where he sang at the Met, Carnegie Hall, Boston and Dallas amongst others.
His repertoire was extremely varied and his discography is not to be ignored. André Tubeuf once stated about the triumvirate of French baritones : Massard and Blanc have become the true successors of Lassalla and Renaud and France may have discovered a second Maurel in Bacquier.

Where are their successors now?

(* In a future issue operanostalgia will devote more on Rita Gorr).