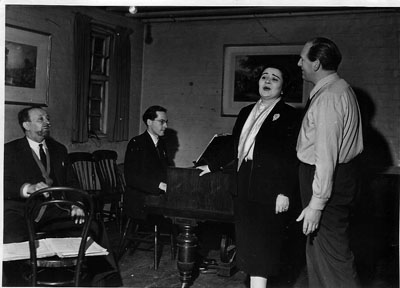 An article on the last page of the November issue of OperaNews made it clear: book publishers are not into music books anymore. That's why so few books on singers are appearing nowadays compared to the not so distant past. That's why I admire so much those little companies who in a way took over from the giant publishing houses. Often small scale books with less glamour than the big shots can offer yet also often dealing with a far more interesting subject than Callas, Pavarotti, Bocelli or Fleming for that matter. And here comes in tenor Edgar Evans, a name I was familiar with from reading the British magazine Opera'. Yet it was just a name as in the past I was not too keen on tenor sounds from this sceptred isle'.

While the author was a former student and nowadays a good friend of the Welsh tenor (1912) we can't expect a critical biography yet the book gave me much pleasure in reading as the story told by the tenor is pretty straightforward, often revealing, always interesting and in a way a history of how opera was done in those days or as the book's cover puts it : the book is not only Edgar's story from farm to Garden- but it also offers insight into life in the inter-war years; the worlds of music and show business after the war'. And the book does exactly do that. Sadler Wells, Covent Garden , the British music scene and its interpreters come wonderfully alive in the narrative.

There are a few typos such as Borza for Borsa, Che l'a mi creda for Ch'ella mi creda or Die Mastersinger von Nurnberg for Die Meistersinger but as said these are few. More questionable is the statement by Evans on page 16 that in 1921 he heard a broadcast of Enrico Caruso singing at Covent Garden ' while we know that 1914 was Caruso's last season at the house in Floral street . Evans more likely heard his records on the wireless. Yet the stories evoked are often priceless. It was immensely interesting and great fun to read about Britten and Pears, Sir Malcolm Sargent, Geraint Evans, Joan Ingpen, the Dickies, Joseph Hislop, Kleiber, Solti (hilarious) and David Webster amongst many others. The book has many interesting and unique photographs, a selective chronology and an index.

I can only wish more books of this kind were written. More info on the book can be obtained from the link mentioned above, including some pictures.