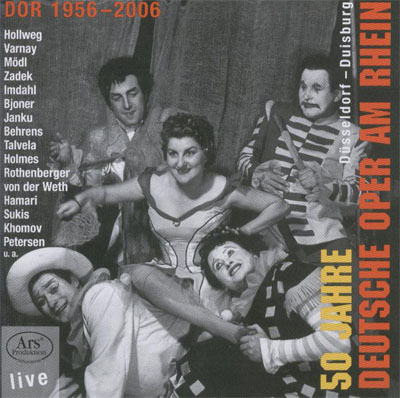 What a wonderful tribute made up of excerpts of various in-house recordings of both the Duisburg and especially Dusseldorf opera house. Both cd's offer a wealth of musical pleasure often of singers who didn't record commercially and in general surprised this reviewer with their enormous vocal talents. Not only did the singers impress but also the orchestra is of an unbelievably high level. The more so realizing that especially in the early years an opera house brought many more productions in a season than in today's case. Meaning of course far less time to rehearsals.

Moreover the listener shouldn't be scared of by the live aspect' of the recordings, they are all in very fine sound.

Both Grist, Battle and Dessay are/were wonderful Zerbinetta's but they weren't at all unique. Just listen to Grossmaechtige Prinzessin' the opening recording of Cd one featuring Ilse Hollweg in 1956. I was literally flabbergasted : perfect technique, superb pitch, excellent breath control and supplying a diction very few of today's German born singers can supply.

In the sixties and even early seventies the general public in Belgium , the Netherlands and the German speaking world all knew Ingeborg Hallstein, Erika Koth, Renate Holm and Margrit Schram. Mostly from their television appearances. Yet probably beating them all was Anneliese Rothenberger who from 1956 till 58 was a member of the DOR. She can be heard a in an excerpt from Rigoletto under Alberto Erede in 1957 with Heinz Imdahl as the unfortunate jester. Again only superlatives can suffice. Imdahl can also be heard in Macbeth's Banquet scene opposite the recently deceased Astrid Varnay, again under Erede. The 1958 season offers a radiantly sung excerpt from Rosenkavalier with Hilde Zadek and Hanna Ludwig as Octavian. Then comes the recently deceased Ingrid Bjoner singing Aida's first solo scene and while I don't agree with the assessment of Thomas Voigt in the booklet describing her performance as exemplary voice-leading, from the subtlest piano to dramatic outbursts' it still is a damn good rendition. What is lacks for me is a finishing touch in some phrases but then it's a hell of an aria to bring off 100 % well. Young Martti Talvela can be heard in Boris's death scene. Let's say the guy knew already then what he was doing and he brings the aria with the necessary pathos and excellent enunciation, in German of course as was the habit at the time.

In 1970 Guiseppe Patané conducted a Tosca featuring Hana Janku in the title role and William Holley. She of course brings Turandot volume to the role but also some fine caressing. The American tenor William Holley who displays an excellent tenor voice easily stands his man against this volcano of sound and hearing this recording one wonders why he was never engaged at the Met. Superlatives still apply to Julia Hamari's Cenerentola (1974) and Hildegard Behrens (1975) shows that her voice was more suited to Rusalka's song to the moon than to the Strauss-Wagnerian repertoire which brought her fame but also led to shambles vocally. In 1977 Eugene Holmes still brings the house down with his rendition of the prologue to Pagliacci but from then on things start to be less extraordinary. I have no reason other than that the compiler of the material is a well-known admirer of Martha Moedl that an excerpt featuring the veteran voice is included. In 1987 Moedl probably could still bring stage presence in Wolfgang Fortner's Bluthochzeit' but I would have by far preferred William Holley in one of the Tosca solos for instance. Luckily in 1979 Lilian Sukis brings a very Italianate and thrilling rendition of Donde lieta usci' (spelled wrongly in the booklet as d'onde) and George Tscholakoff is a decent Rodolfo. They are joined by Iranian soprano Nassrin Azarmi ( yep they did have an opera tradition under the late Sjah) as Musetta and Eugene Holmes as Marcello.

Alexandra van der Werth is a rather heavy Manon in 2003 and Sergej Khomov a disappointing Des Grieux in the Sulpice scene. Luckily from 1992 there's the preserved and still excellent Scarpia of veteran Zenon Kosnowski. In 2003 John Fiore conducts Nataliya Kovaleva in a more or less trill included' stentorian version of Nedda's bird song'.

From the same year dates the finale from Puccini's Tabarro with Gordon Hawkins as an okay Michele but the excerpt should really be heard for the party disk double hysterical yell delivered by Therese Waldner as Giorgetta. It made me almost jump from my chair. Worthwhile purchasing the disk for this fun alone J

The last excerpt : Ophelia's mad scene from Thomas's Hamlet was recorded this year and sung trop chargé' for my taste by Marlis Petersen.

On the whole a very satisfying compilation which left me though with one question mark. A history of a German opera institution without a single operetta excerpt? I'm not familiar with the chronology of the Dusseldorf-Duisburg opera houses but I can't imagine they didn't perform operetta and for this reviewer operetta is as much art as opera itself.