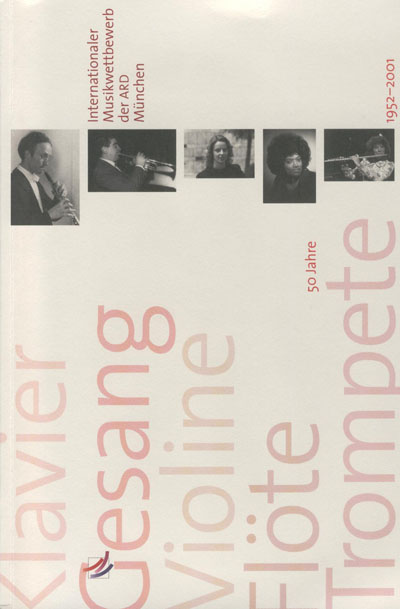 
This is a very welcome book and at 20 Euros a real bargain as well. Moreover I don't know of too many other books dealing with singing competitions and its history.
In fact this is only the third one on the subject I know of. Previously the chronology of the Verviers competition (Wallonia) was included in Georges Cardol's Cents ans d'art lyrique a Verviers' and the Dutch s'Hertogenbosch competition also issued a book on its history (see www.ivc.nu ).
A book which was a major failure as no chronology of participating competitors was included. These two books issued by the ARD gives a complete listing from 1952 till 2005. These listings make fascinating reading and often the epitaph many are called and few are chosen' was in place.

Not too many of the winners -as in every competition- really make a career and often it's the second place girl or boy or even the third place who really managed to achieve an international career.
The 3 CD's accompanying the book include most winners but not all as the years 1952 till 1959 are absent. So the winner of the 1960 competition is the opener of the trip down memory lane. He made it big, very big yet not where they expected him to make it; his name : Hans-Rolf Rippert aka Iwan Rebroff.
Quoting all singers of fame mentioned in the book or included on the CD would spoil the pleasure of discovery' of the reader or listener.

Suffice to say there are some real treasures there including : Ileana Cotrubas (1966), Jessey Norman (1968), Francisco Araiza (1974) and later on Von Otter and Quasthoff amongst several others.
Even more interesting perhaps is the listing of the members of the jury. Regrettably though the year is which they were present is lacking. These numerous legendary names include Lorenzo Alvary, Gino Becchi, Joel Berglund, Erna Berger, Karin Branzell, Gina Cigna, Suzanne Danco, Dusolina Giannini, Eleanor Steber(!) to name but a few.

Mind you the ARD music competition isn't a singing competition only, a large part of it is also devoted to instrumental music. So if you're also a piano or violin buff you will be in for some happy surprises as well.