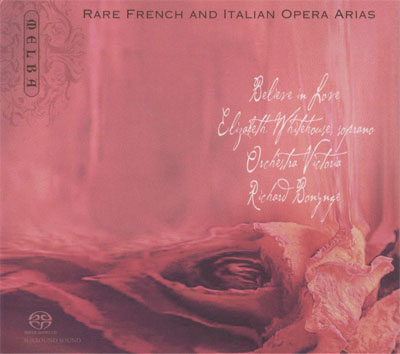 This CD definitely is the most unhackneyed recital to have been recorded in 2006, surpassing Fleming ' s  Diva ' and whatever unknown music Ms. Bartoli has  discovered  to avoid comparisons with her mezzo-predecessors. I don ' t doubt for a moment this project was Richard Bonynge ' s idea. The CD is an example of Melba ' s (the recording company, not the soprano) policy for making records searching  for talent and individuality in a world where the homogeneous and the mass-produced can become commonplace  as the label states its mission. Indeed, another recital of Verdi and Puccini arias wouldn ' t have us sit up and take notice. Most opera lovers nowadays have the feeling they themselves composed those arias and Elisabeth Whitehouse cannot compete with the Tebaldis, Prices, Arangi-Lombardis or Spanis of this world. This doesn ' t mean that her spinto voice is to be despised. On the contrary. She has a very good agreeable soprano, reminding me of the voices of Lucine Amara, Mary Curtis and Marie Collier: ladies who had a strong base in New York or London, as does Miss Whitehouse in Australia, and who, apart from the many deserved plums they got from a grateful management, were always ready to substitute whenever one of the legendary sopranos cancelled a performance. What I mean is that the one chink in the vocal armor of Elisabeth Whitehouse is an unforgettable, kissed by the gods timbre which only the truly great have. But the rest is there in abundance: a good legato (I cannot think that Bonynge would record with a soprano who did not have that necessary attribute), a fine sense of dynamics and a good top, only straining a few times at the very end of the scale. She sings with conviction and can float her voice like she does in Adriana Lecouvreur . I for one would be glad to hear her in any of the operas these arias come from. Indeed, I very much regret that she was not in the complete recordings of Salvator Rosa, Zazà (the Bongiovanni, not the Warner Cetra) or the brilliant Mascagni operetta Si which really lacks such a fine voice. I like her marginally better in Italian than in French opera. Her Italian enunciation is better and clearer; no doubt as a consequence of the many Italian roles she has under her belt. In French too she has some formidable competitors like Charlotte Tirard in Cinq-Mars or the more recent undervalued efforts of Françoise Pollet. Still, I would gladly exchange my CD-R copies of pirate performances of Cinq-Mars or Etienne Marcel for a professional recording with miss Whitehouse. Moreover, I may be wrong, but I think the fine (and finely sung) arias from Faccio ' s Amleto and Gounod ' s Le Tribu de Zamora are firsts in the CD area. In short, this is the CD any vocal buff would do well to pick up before it is deleted in a few year ' s time and one has to offer a lot of money on E-bay as the good news has spread among the collector ' s tribe that here is an exciting repertory and a good voice to go with it. As always, Mr. Bonynge splendidly accompanies his singer and brings out some hidden beauties and fine details in the orchestral score of many a piece. One sighs too if one compares the Victoria Orchestra with the pedestrian sound made by some of the cheap often East-European orchestras employed by Bongiovanni for recordings of neglected verismo. One complaint however to the producer of this important recording, Maria Vandamme (she must have Flemish roots as Damme is a fine little city near Bruges; Joseph Van Damme  better known as José van Dam  and Jean-Claude  muscles from Brussels  wear the same name). The sleeve shows a rosy non-descript thing (a flower?) and the name of the singer and conductor in small handwritten white. ( Might he pink refer to the color of the label when Melba's 78's were issued?)

I saw the CD in one of Germany ' s biggest record departments and one almost doesn ' t notice it among the more obtrusive and flashy far less worthy operatic recitals. Maybe this too is proof of  individuality in a homogeneous world  but I nevertheless think such an important issue deserves to be noticed more easily.

PS . Melba is Schedule to record, this year, a long-forgotten Saint-Saens opera Helene, an opera written for Melba.